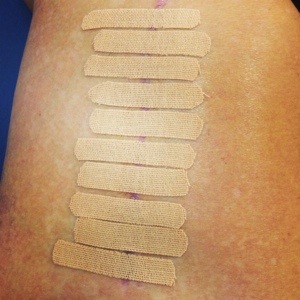 The last couple years, I have been held together with tape–or at least that’s what it has felt like. I had been having some pretty severe knee pain which we had been attributing to patellar tendonitis which I do actually have. But now knowing I also had a bone tumor near my knee joint, it is difficult to know what pain came from the tumor and what pain came from the tendonitis. Nonetheless, we thought we were just dealing with tendonitis and there is a tape application that was very helpful for me in getting me past the pain of running–McConnell patellar taping. The logic behind it makes a lot of sense, it allows your knee cap to be positioned correctly in the knee using some pretty strong tape.

I was first introduced to athletic tape was as a sophomore in high school. I decided to get a little crazy with the grapevine in gym class and went down hard on my ankle. It had swelled to the size of a grapefruit before I could get to the nurse’s office. Turns out it was just a sprain, but pretty severe. Since I was not able to participate in the dance unit for gym as per the doctor and the aircast, I spent the hour with the athletic trainer rehabbing my injury. From my corner of the room writing the alphabet with my toes, I watched the varsity athletes parade through to get all prepped for practice and games, and that was when athletic tape and I first met.

Tape and I have had some interesting times. One of my internships during college literally had me using a roll of scotch tape a day to prep the press clippings. That is where I also learned how to apply tape in such a way that it does not show up on a copy. (All skills learned in that job now obsolete due to technology–scanner, anyone?!)  I am usually not far from a roll of duct tape, as you know it can fix almost anything, and has served to fix a hem, seal up a draft, make an emergency bandage and more. (Never did have a duct tape wallet, though.) But the tape that fascinates me the most is kinesiology tape.

Often called magic tape, kinesiology tape is supposed to be able to speed up the healing process by increased circulation as well as providing light, but not restrictive, muscular support. I have seen how the tape has worked on contusions in some amazing ways, so I wondered if it might be something that could aid in the healing of my scar. So we decided to give it a go last friday at PT. We placed small strips directly along the scar alternating the direction of the pull from the tape, so while the top one pulled left the next one down pulled right, and so on. Then to anchor that in, we placed a larger piece of tape on top. After 48 hours, I pulled the tape off and it seemed to make a difference both to my eyes and that of my PT, so we are trying it again.

I like the idea of tape being something that heals…it’s sticky and binds things together, so why not, right?! I will be sure to let you know how things go.