Around this time of year I often think of my Irish Grandma. Her name was Betty and she was a pretty amazing woman. As if raising 7 kids (5 of whom were boys) wasn’t enough of a life accomplishment, she went back to school later in life and became Dr. Menson when she graduated with her Ph.D. in counseling and higher education. I was lucky to live close enough to her and my grandpa while growing up that we often got to see them. We would travel to see them for the Menson family thanksgiving and for their annual Christmas open house each year and they would visit at least once in the spring if not more. There was seldom a special occasion they were not present for–recitles, graduations, and more. I also remember receiving postcards and hearing stories about their travels around the world in their retirement. But the best family memories were made at “Our Anchorage” — the cottage her father built on the coast of New Hampshire in the early 1900s.

As a kid, the house was huge and all the cousins would sleep in the bunk room upstairs. We would wake up early in the morning and convince  some grown up to take us across the street to the rocks during low tide where we would explore tide pools and climb boulders and stare out into the sea to see if we could spot the isle of shoals. At some point we would convince another adult to take us down to the beach where we would play in the northern Atlantic waters until we turned blue. After a short time in the sand warming up, it was back into the frigid water to play some more. After getting back from the beach there would be board games on the porch or card games in the breakfast nook but if you were lucky, you got taken by the adults to the docks where our dinner was bought fresh off the boat and brought back to the house still very much alive. Lobster races would ensue in the kitchen before we ultimately dropped them into the lobster pot. The family dinner that followed was always full of jokes and stories and martinis and of course a crying cousin or two (admittedly often me) who was over-tired from the day’s activities.

From the table the conversation moved to the porch, where the adults would talk until long past when the kids went to bed. I think I was in college before I was part of these late night talks which became the hallmark of visits with Grandma until her health started to decline. Grandma never slept well at night, especially after my grandpa died. After being married for 57 years, I have to think it would be difficult to be alone. Don’t misunderstand me, Betty was an independent woman–she was a member of the American Association of University Women, she was an elder at her church, she even came to visit me in France when I lived there, but she had lost her life partner and that must make one lonely and especially so for a woman who had a lot to say.

In these conversations we talked about family folklore, about politics, about how the world was changing and about how to change the world. As I grew older and the house somehow grew smaller fewer folks were there at the same time and eventually these conversations were just between grandma and me. We talked about many of the same things but also a lot about prayer and about faith but not that much about Jesus. And we talked a lot about education when I decided to follow in her footsteps and get my masters degree in a field related to her advanced degrees.

I remember a particular visit to see my grandma one fall. I told her the next time she would see me I would look different. I had just started trying to run and I was ready to be healthy and active and take control of the things I could that would lead to a longer and more fulfilling life. It was also that year that I started swimming and biking and became a triathlete. I remember seeing her six months later and her recounting that conversation we had and how delighted she was that I had kept my promise to her.

There was never a birthday without a card from grandma where she would write how proud she was of the woman I had become, the adventures that I had taken, and the faith I had developed. With tears I remember the last birthday card I received from her just a few days after her death that was penned by my aunt with words from my grandma. Even in her last days she was thinking of others…of me and beaming with pride.

My grandma died on December 2, 2010. In some ways it seems like yesterday and in others it seems so long ago.

I was shaped by my Irish grandma in many ways that I recognize and most that I don’t. I am proud of her, proud that we would have been colleagues, and proud to be her Irish granddaughter.

Erin go bragh. We miss you down here. 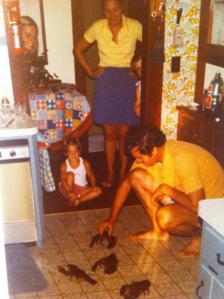 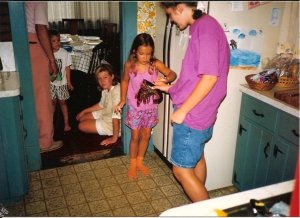 You can read more about the life of my grandma in her obituary at the following link: http://www.legacy.com/obituaries/lancastereaglegazette/obituary.aspx?n=elizabeth-carroll-menson&pid=146987846