In a recent post I said training has been going well for the most part and that I would explain later…well, hello later. If you know me or you have read my blog you probably know that I struggle with running. It’s definitely my weakest area of the three disciplines that make up triathlon. I just don’t see myself as a runner. It’s something that goes back to growing up as a kid with asthma. I was told not to run and often times just wasn’t able without the onset of an asthma attack. So I have this voice in the back of my head that I have to fight every time I head out for a run, telling me I shouldn’t and that I have no business trying to run.

I tried running again 5 years ago (had previously tried a couple times before) and this time I was determined to make it work. At first it was just down the block, then I worked up to a 2 mile loop in my neighborhood, and then ran my first 5K and a year and later a half marathon. Despite covering all of these distances, I have always been a slow runner–even my fast is pretty slow. But of course I would like to get faster and in all honesty I have gotten faster, but there is much more room to grow there.

Some runners will tell you that they only have one speed. And while I know that you should have more than one speed, for a while during this round of training, I had fallen into the trap of just running one speed. As my coach put it, I was running in the grey. He reminded me that I need to have more than one speed and made sure to point out that there should be a difference between my slow and my fast. To help me understand that, he has been giving me paces to hit and not exceed on my runs. While it has been a challenge to pull back on the long runs and to reign things in when I am feeling good, I can honestly say that I feel a whole lot better at the end of a run and am recovering a lot faster while at the same time getting to push myself on intervals beyond my comfort zone. It’s exciting to see the progress in training and I am excited to get out to a race to see what happens when I put it all together.

I still struggle to call myself a runner–I have some goals set that I hope to attain this year that will help me justify the runner name. At the same time, I completely embrace the label of triathlete–running is best when done after a swim and a bike ride. 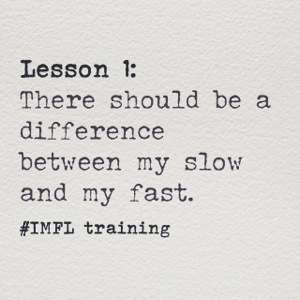 What lessons are you learning in your training?